The Story of the Phoenix 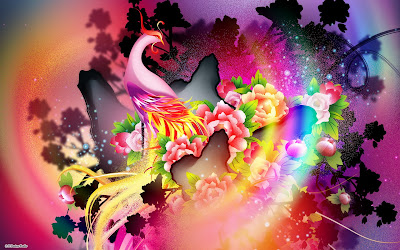 The Story of the Phoenix

There is a bird that lays no eggs and has no young. It was here when the world began and is still living today, in a hidden, faraway desert spot. It is the phoenix, the bird of fire.
One day in the beginning times, the sun looked down and saw a large bird with shimmering feathers. They were red and gold--bright and dazzling like the sun itself. The sun called out, "Glorious Phoenix, you shall be my bird and live forever!" Live forever!
The Phoenix was overjoyed to hear these words. It lifted its head and sang, "Sun glorious sun, I shall sing my songs for you alone!"
But the Phoenix was not happy for long. Poor bird. Its feathers were far too beautiful. Men, women, and children were always chasing it and trying to trap it. They wanted to have some of those beautiful, shiny feathers for themselves.
"I cannot live here," thought the phoenix. and it flew off toward the east, where the sun rises in the morning.
The Phoenix flew for a long time, and then came to a far away, hidden desert where no humans lived. And there the phoenix remained in peace, flying freely and singing its songs of praise to the sun above.
Almost five hundred years passed. The Phoenix was still alive, but it had grown old. It was often tired, and it had lost much of its strength. It couldn't soar so high in the sky, nor fly as fast or as far as it was young.
"I don't want to live like this," thought the Phoenix. "I want to be young and strong."
So the Phoenix lifted it's head and sang, "Sun, glorious sun, make me young and strong again!" but the sun didn't answer. Day after day the Phoenix sang. When the sun still didn't answer, the Phoenix decided to return to the place where it had lived in the beginning and ask the sun one more time.
It flew across the desert, over hills, green valleys, and high mountains. The journey was long, and because the Phoenix was old and weak, it had to rest along the way. Now, the Phoenix has a keen sense of smell and is particularly fond of herbs and spices. So each time it landed, it collected pieces of cinnamon bark and all kinds of fragrant leaves. It tucked some in among its feathers and carried the rest in its claws.
When at last the bird came to the place that had once been its home, it landed on a tall palm tree growing high on a mountainside. Right at the top of the tree, the Phoenix built a nest with the cinnamon bark and lined it with the fragrant leaves. Then the Phoenix flew off and collected some sharp-scented gum called myrrh, which it had seen oozing out of a nearby tree. The Phoenix made an egg from the myrrh and carried the egg back to the nest.
Now everything was ready. The Phoenix sat down in its nest, lifted its head, and sang, "Sun, glorious sun, make me young and strong again!"
This time the sun heard the song. Swiftly it chased the clouds from the sky and stilled the winds and shone down on the mountainside with all its power.
The animals, the snakes, the lizards, and every other bird hid from the sun's fierce rays -- in caves and holes, under shady rocks and trees. Only the Phoenix sat upon its nest and let the suns rays beat down upon it beautiful, shiny feathers.
Suddenly there was a flash of light, flames leaped out of the nest, and the Phoenix became a big round blaze of fire.
After a while the flames died down. The tree was not burnt, nor was the nest. But the Phoenix was gone. In the nest was a heap of silvery-gray ash.
The ash began to tremble and slowly heave itself upward. From under the ash there rose up a young Phoenix. It was small and looked sort of crumpled, but it stretched its neck and lifted its wings and flapped them. Moment by moment it grew, until it was the same size as the old Phoenix. It looked around, found the egg made of myrrh, and hollowed it out. Then it placed the ashes inside and finally closed up the egg. The young Phoenix lifted its head and sang, "Sun, glorious sun, I shall sing my songs for you alone! Forever and ever!"
When the song ended, the wind began to blow, the clouds came scudding across the sky, and the other living creatures crept out of their hiding places.
Then the Phoenix, with the egg in its claws, flew up and away. At the same time, a cloud of birds of all shapes and sizes rose up from the earth and flew behind the Phoenix, singing together, "You are the greatest of birds! You are our king!"
The birds flew with the Phoenix to the temple of the sun that the Egyptians had built at Heliopolis, city of the sun. Then the Phoenix placed the egg with the ashes inside on the sun's altar.
"Now," said the Phoenix, "I must fly on alone." And while the other birds watched, it flew off toward the faraway desert.
The Phoenix lives there still. But every five hundred years, when it begins to feel weak and old, it flies west to the same mountain. There it builds a fragrant nest on top of a palm tree, and there the sun once again burns it to ashes. But each time, the Phoenix rises up from those ashes, fresh and new and young again.