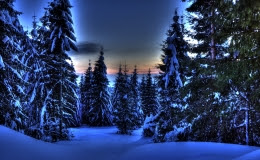 At the Winter Solstice, we celebrate Children's Day to honour our children and to bring warmth, light and cheerfulness into the dark time of the year. Holidays such as this have their origin as "holy days". They are the way human beings mark the sacred times in the yearly cycle of life.

In the northern latitudes, midwinter's day has been an important time for celebration throughout the ages. On this shortest day of the year, the sun is at its lowest and weakest, a pivot point from which the light will grow stronger and brighter. This is the turning point of the year. The romans called it Dies Natalis Invicti Solis, the Birthday of the Unconquered Sun.

The Roman midwinter holiday, Saturnalia, was both a gigantic fair and a festival of the home. Riotous merry-making took place, and the halls of houses were decked with boughs of laurel and evergreen trees. Lamps were kept burning to ward off the spirits of darkness. Schools were closed, the army rested, and no criminals were executed. Friends visited one another, bringing good-luck gifts of fruit, cakes, candles, dolls, jewellery, and incense. Temples were decorated with evergreens symbolizing life's continuity, and processions of people with masked or blackened faces and fantastic hats danced through the streets.

The custom of mummers visiting their neighbours in costume, which is still alive in Newfoundland, is descended from these masked processions.

Roman masters feasted with slaves, who were given the freedom to do and say what they liked (the medieval custom of all the inhabitants of the manor, including servants and lords alike, sitting down together for a great Christmas feast, came from this tradition). A Mock King was appointed to take charge of the revels (the Lord of Misrule of medieval Christmas festivities had his origin here).

In pagan Scandinavia the winter festival was the yule (or juul). Great yule logs were burned, and people drank mead around the bonfires listening to minstrel-poets singing ancient legends. It was believed that the yule log had the magical effect of helping the sun to shine more brightly.

Mistletoe, which was sacred because it mysteriously grew on the most sacred tree, the oak, was ceremoniously cut and a spray given to each family, to be hung in the doorways as good luck. The celtic Druids also regarded mistletoe as sacred. Druid priests cut it from the tree on which it grew with a golden sickle and handed it to the people, calling it All-Heal. To hang it over a doorway or in a room was to offer goodwill to visitors. Kissing under the mistletoe was a pledge of friendship. Mistletoe is still forbidden in most Christian churches because of its Pagan associations, but it has continued to have a special place in home celebrations.

In the third century various dates, from December to April, were celebrated by Christians as Christmas. January 6 was the most favoured day because it was thought to be Jesus' baptismal day (in the Greek Orthodox Church this continues to be the day to celebrate Christmas). Around 350, December 25 was adopted in Rome and gradually almost the entire Christian Church agreed to that date, which coincided with Winter Solstice, the Yule and the Saturnalia. The merry side of Saturnalia was adopted to the observance of Christmas. By 1100 Christmas was the peak celebration of the year for all of Europe. During the 16th century, under the influence of the Reformation, many of the old customs were suppressed and the Church forbade processions, colourful ceremonies, and plays.

In 1647 in England, Parliament passed a law abolishing Christmas altogether. When Charles II came to the throne, many of the customs were revived, but the feasting and merrymaking were now more worldly than religious.

Here in Nova Scotia outdoor coloured lights play an important part in the local celebration of the mid-winter season. With the day turning to darkness so early in the North, it is cheering to look out into the cold and dark at lights sparkling and glittering in the crisp air.

Our celebration of Children's Day is inspired not only by the pagan celebrations of mid-winter but arises also out of the Japanese holidays of Boy's Day and Doll's Day, which are two separate days in the spring, when boys and girls of a certain age are presented to the temple and honoured with special gifts. The Shambhala Children's Shrine is modeled after the display of ancestral dolls traditional in homes on Doll's Day.

Our sangha is our village, our clan, our family. Our children belong to all of us, and are bright reminders of the future of Buddhism. We celebrate them and the Great Eastern Sun together at the darkest time of the year, with open-hearth parties and cheerful festivities.

The Unconquered Sun first appeared as an article by Janet Shotwell in The Karma Dzong Banner
(Vol III, No 11, December 1991, Halifax, Nova Scotia).


HAPPY HOLIDAYS TO ALL! May Love surround you